From the Dream Archives: Skywalker & Sons


Dreamt an odd dream that another animated Star Wars TV series/film had been released. Only this one was done in a 2D semi-anime style rather than in CG. The series/film was centred around Luke Skywalker and his two sons. 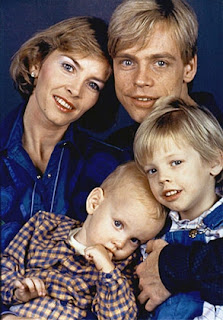 One of these sons — Alexander, I believe he was named — was his biological son, while the other — whose name I can't recall — was a foster child he'd decided to take under his wing.

The plot was essentially as follows: Alexander — being one of those "bad seed" kids who show up in a plethora of derivative horror/thriller films — is found and trained by a darksider right under Luke's nose.

(He had a darksaber, too. Fuck that red shit.)

Meanwhile, the foster son — who was a darksider himself before Luke took him in — finds himself drawn evermore towards the light.

Anywho, the dream pretty much came to a close on that note. There were loads of other minute details, but I've forgotten them.
Posted by Duragizer at 12:44:00 AM