I was taking a casual stroll, minding my own business, bothering nobody, when I crossed paths with a Greek sphinx. 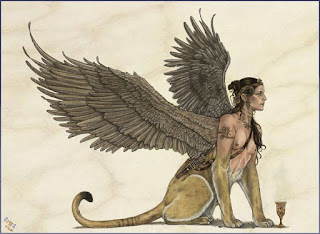 She gave me a friendly smile, then proceeded to attack me. I took off running to get away from her, but she was incredibly swift, so I really had to pump those calves to keep ahead of her.

I soon came to a tall flight of dirt steps which led to a Greek temple. I ran up those dirt steps, telling myself not to look back, that if I looked back I'd see the sphinx right behind me, falter from fear, and be swiftly overtaken, so I forced myself to keep looking ahead.

Unbeknownst to me, the sphinx had circled around, and before I could reach the temple, she was before me, rearing up, ready to take me down with her claws. I tried warding her off with a baseball bat, but she was too massive and powerful; I was dead meat.


Just north of my house lies a large empty field. Seated inside my sister's F-150, I was parked on the edge of this field, just staring straight ahead at nothing in particular. That's when two SUVs came driving through, racing each other at breakneck speed. One of them passed too close, knicking a headlight. After the SUVs were past, I leapt out of the truck, yelling after the one who'd hit me. When I went to check the Ford for damage, I found it hadn't so much as a scrape, luckily.

A small pack of wild dogs came running past, following the SUVs. Fearful they'd get run over by those careless assholes, I followed them, trying to persuade them to leave the area. That's when I found amongst them Cheech, my dog who'd gone missing this April. Around his torso had been secured a plaid bandage. Apparently he hadn't been killed by coyotes as the family and I had believed, just injured then nursed back to health by some good Samaritan.

Getting my family to assist me, I picked Cheech up and carried him inside the house, taking care not to jostle him too much because he was still healing from his ordeal. At this point, I began suspecting what was happening wasn't real, just a dream. Then I awoke. Cheech is still gone, almost certainly dead, and I miss him. 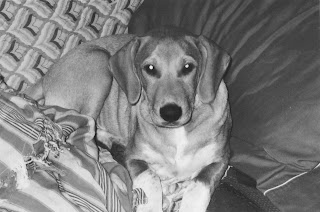