Let's Do the Time Warp Again

The earliest part of this dream I recall is standing in the living room and noticing a heavily rewritten-&-reshot version of Stargate Origins playing on TV. 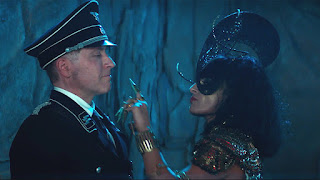 (Unlike the real SGO, the costumes looked good and the plot wasn’t shit.)


My father then started complaining about something, so I left the room.

It was late August, but the weather was unseasonably cool, so it felt more like fall. I found a medium-sized lizard outside; it had grown sluggish from the chilly weather. Carefully, I picked it up — it had sharp teeth and didn’t like being handled, so I wasn’t gonna be careless — then brought it to the garage so it could go into suspended animation in a sheltered area. The Joker then appeared.

The Clown Prince of Crime started handling the lizard, subtly implying he was going to harm the creature. After some minutes spent begging the Joker to let the lizard alone and leave, he lost interest in the animal, set it down, and went away.

I was then taking a leisurely walk in the back yard. A sensation of foreboding fell upon me, a strange “time lapse photography” effect occurred in the sky, and I suddenly found myself in the dead of winter. Going back to my house, I found things were stranger than I ever could have believed; I had experienced a time warp and was now 62 years into the future. Having taken anti-aging drugs, my parents were still alive (indeed, they looked younger and healthier than they do/did in real life) and my sister had had a sex change; she now had man-abs and a three-man army in her pants 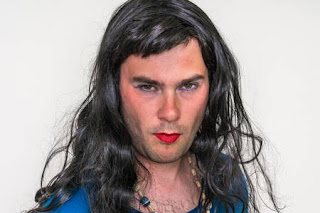 (Yet for reasons beyond my understanding, she still wore her hair long and was in makeup.).
Posted by Duragizer at 11:02:00 PM