The Infamous Lake Country Wildfire of '17

I, my parents, and my sister were out visiting neighbours when a wildfire sparked off to the east of us. It was so intense, it sent a veritable pillar of flame into the sky, a thick blanket of gray smoke unfurling to cover the firmament. The fire was very close — several hundred metres away at most — and due to its ferocity, it was believed it would grow beyond control and overtake our homes before fire fighters could arrive to contain it.

Fearful for the fates of my pets and belongings, against the warnings of all others, I took off in a dead run for home to collect who and what I could in the short time allotted. Something then happened to me, something which knocked me out cold. When I came to in the hospital, weeks had gone by. From my family, I learned that our home had been caught in the fire; all our possessions had been destroyed and one of our dogs had died.

The dream then jumped forward in time ten or twenty years. I found myself cutting across the grounds of the UBC Okanagan campus, where I crossed paths with one of the female students. 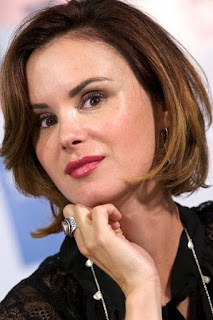 (She was the spitting image of Keegan Connor Tracy.)


I inquired if she knew of the infamous Lake Country Wildfire of '17; she said she did. I then asked her if she'd like to come with me to visit the old neighbourhood; she said she did. Together, we made the trip on-foot to my old neighbourhood. The townscape had transformed considerably since the 2010s. For example, where there had once been a small church now stood a series of Arby's restaurants. 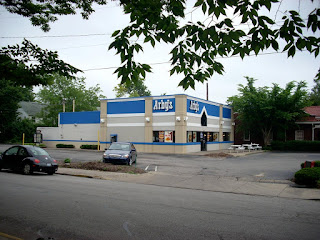 (Arby's had transitioned from a chain of sandwich restaurants to a Dairy Queen clone in the intervening decades.)

Arriving on the site of where my house had stood, we found no remaining trace of it. In its stead were several white houses and sheds, some enveloped in clear plastic, all smouldering. There was even a Chow Chow lying on a front yard who was ashy and smoky. 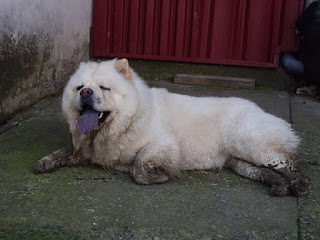 (He was alive and uninjured in spite of this (I suppose some dogs are just more fire-retardant than others.).).


My companion pondered on how the area could still be smouldering after all these years; I gave an existential answer about how the location still retained the memory of that fire in its soil or something poetic like that, but I knew what was happening was truly the direct result of a recent wildfire.
Posted by Duragizer at 11:10:00 PM